Keith Chaffee, Librarian at the Collection Development department of the Los Angeles Public Library, has posted a remembrance of "Casey at the Bat" for the 131st anniversary of the ballad's first appearance in the San Francisco Examiner. We'll post it here, with thanks to Keith for the links to several of the lesser-known narrations and musical versions of "Casey," as well as to the delightful artwork of sports cartoonist Willard Mullin, whose mid-20th-century illustrations of the ballad were not published in book form until 2015. With a few edits to the link to Randol Alan Bass's version with narration of "Casey" played by the U.S. Marine Band, the column below is as it was posted by the Los Angeles Public Library.

We will be commemorating another milestone on August 14, 2019, marking the 131st anniversary not only of DeWolf Hopper's first performance of "Casey" on Broadway, but also celebrating Ernest Thayer's birthday! 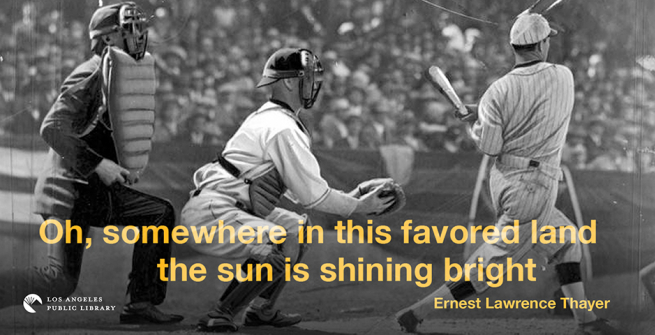 Ernest Thayer's baseball poem "Casey at the Bat" was first published on June 3, 1888, in the San Francisco Examiner. The story of the Mudville baseball team is a classic piece of comic verse, and its final line—"there is no joy in Mudville—mighty Casey has struck out"—is familiar even to people with no interest in baseball or poetry.

Hearst's father, George, had purchased the Examiner mostly as a way of publicizing his campaign for the United States Senate; once he was elected, he had no interest in the newspaper any more, and turned it over to William to run. Hearst and Thayer had worked together on Harvard's humor magazine, the Lampoon, and Hearst asked Thayer if he would write some humorous pieces for the Sunday edition of the Examiner.

Beginning in late 1887, Thayer submitted a series of comic poems, signed as "Phin," his college nickname. "Casey at the Bat" was the last of these poems to be published, and Thayer was paid the usual five dollars for the piece. In the poem, the Mudville team is down by two runs in the last inning, and the crowd pins all of its hopes on Mudville's star player, Casey, only to be disappointed when Casey strikes out with two men on base.

A few weeks later, the members of the Chicago White Stockings and New York Giants baseball teams were invited as special guests to a production of a comic opera in New York, and the company wanted to do something special to honor their guests. Actor DeWolf Hopper memorized the poem, and his recitation was worked into the show that evening. It brought down the house, and Hopper began to perform it in vaudeville. By his own estimation, he eventually performed "Casey" more than 10,000 times.

Hopper admired Thayer's poem immensely. "There are one or more Caseys in every league, bush or big," he said, "and there is no day in the playing season that this same supreme tragedy, as stark as Aristophanes for the moment, does not befall on some field.”

The copy from which Hopper had learned the poem didn't have the author's name on it, and Hopper performed "Casey" for several years without knowing who had written it. When he finally met Thayer, he reported that the author's recitation of the poem could not stand up to his own: "In a sweet, dulcet Harvard whisper [Thayer] implored Casey to murder the umpire, and gave this cry of mass animal rage all the emphasis of a caterpillar wearing rubbers crawling on a velvet carpet."

None of Thayer's other poems or comic essays are remembered today, and he was baffled that "Casey" should be the piece for which he was remembered. "In general quality 'Casey' (at least in my judgment) is neither better nor worse than much of the other stuff," Thayer wrote. "Its persistent vogue is simply unaccountable."

Thayer's opinion notwithstanding, "Casey at the Bat" has been persistent, indeed. Several different illustrated editions are available; the mid-20th-century sports cartoonist Willard Mullin drew illustrations for each stanza of the poem in 1953 for a minor league baseball convention. Some of those drawings were printed on drinking glasses and other premiums given away at minor league ball parks, but the drawing weren't seen by most people until they were published in book form about sixty years later.

The poem has been recorded many times, including this performance by Vincent Price. Several different composers have created musical versions of the poem; (in this link the U.S. Marine Band performs a version for band and narrator written by Randol Alan Bass).

The 1946 Disney film Make Mine Music, a collection of animated shorts, includes a cartoon version of the poem, narrated by Jerry Colonna, who was best known as one of the sidekicks on Bob Hope's radio show.

John Evangelist Walsh tells the story of how "Casey at the Bat" was written, and how it became so well-known, in The Night Casey Was Born.

Casey at the Bat

On Heroism, Hubris, and Humility